CLOSED FOR INSTALLATION UNTIL FEB 2

Curated by Julia Pavone, Soderberg Unfurled! is a special museum-wide exhibition reuniting artworks by a local legend from more than 30 private collections and arts institutions. Best known for his maritime etchings set in and around Fisher’s Island Sound and Money Point on Mason’s Island, Yngve Edward Soderberg (1896-1972) was also a celebrated illustrator, watercolor and pastel artist, sailor, and teacher.
Recognized nationally and beloved locally, Y.E. Soderberg’s works grace the collections of Mystic Museum of Art, the Lyman Allyn Museum, the Mattatuck Museum, the Mystic Seaport Museum, the Smithsonian Institution, the Denver Art Museum, and the Nelson-Atkins Museum of Art,  as well as the walls of homes in Mystic, Noank, and other surrounding communities. Personal anecdotes of his life, his sailing adventures, and his impact as an artist enrich the exhibition.
Also on display is Soderberg & Friends, a small curated selection of works pulled from MMoA’s permanent collection featuring additional work by Soderberg as well as pieces by his friends, colleagues, and contemporaries, Harve Stein, Herbert Stoops, Garrett Price, Julian Joseph, and Lars Thorsen.
Selections from Soderberg Unfurled! will remain on display in MMoA’s Liebig gallery through August 17, 2019. 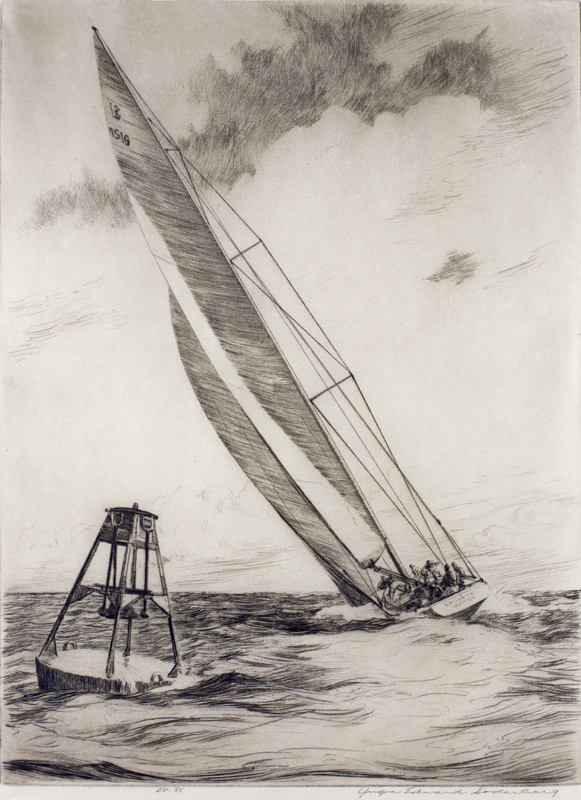 Born in Chicago, Illinois, to Swedish immigrant parents, Soderberg studied at the Art Institute of Chicago; paying his tuition in part through his work as an architectural and commercial artist for such publications as the Chicago Tribune and The New York Herald-Tribune. His success as an illustrator enabled Soderberg to continue his studies at The Art Students League in New York, where he won the coveted Kendall Prize. Following his studies, he traveled to France and Sweden.
Upon his return to the United States, Soderberg moved to Mystic, Connecticut, attracted by the beauty of its rural and maritime setting. On Mason’s Island, Soderberg built a name for himself by producing engravings of small sailboats, cornering a previously non-existent market. It was there he also met his future wife, Nancy Horn, an accomplished sailor in her own right. He began to branch out into watercolor painting, and by the 1930s was painting scenes from America’s Cup races. He portrayed every defending U.S. America’s Cup vessel, even sailing himself on Endeavor II in 1937.
During the Depression, Soderberg produced enormous amounts of work for the WPA: morale posters for the workers at Electric Boat in Connecticut, a mural in the Morris, Pennsylvania, Post Office, and a painting of a small gaff-rigged sloop named Victura in Hyannisport, Massachusetts, skippered by a young John F. Kennedy.
Soderberg had a long and distinguished career that included two artist residencies aboard tall ships: the Danmark, during which he painted the award-winning watercolor Life Boat; and New London’s Eagle, which resulted in an enormous three-paneled mural of the ship under sail at the U.S. Coast Guard Academy. In 1950 he began a seventeen-year career as a teacher at the New London High School. He served as President of the Mystic Art Association—now the Mystic Museum of Art—from 1951-1952.

From the Executive Director

Sign up for email updates from the Mystic Museum of Art, including  newsletters, special events, and art classes.

Thank you to our Generous Sponsors

Learn More About Our Sponsors